Marriage is on the line in ME, MD, MN, NC and WA this year 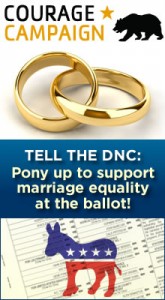 As many as 5 states (Maine, Maryland, Minnesota, North Carolina and Washington) will face ballot referenda on marriage equality this year, where voters will vote on the rights of same-sex couples to marry. To win, we need the Democratic National Committee (DNC) to back the campaigns.

In 2008, the DNC chipped in $25,000 to help fight Prop 8 and then-candidate Obama publicly called for a "no" vote. Let's show the DNC how important it is for them to help again.

Sign below to add your name to this petition to the DNC and we'll deliver it to Chairwoman Wasserman Shultz:

Please chip in to help fight for marriage equality at the ballot in 2012 as you helped fight Prop 8 in 2008. LGBT voters and straight allies have had Democrats' backs in the voting booth for years; now it's time to have ours.