I pledge to drop VISA to stand up for LGBT rights in Russia! 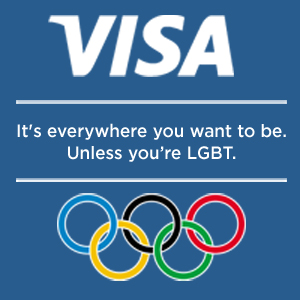 As a major sponsor of the 2014 Sochi Olympics and self-proclaimed supporter of human rights, VISA has a responsibility to speak out against Russia's persecution of millions of its own LGBT citizens.

However, since the global business leader has remained silent about Russia's anti-LGBT laws -- despite outcry from thousands of Courage Campaign members and others -- we must have the courage to put our money where our mouth is and drop our business with VISA.

Be sure to switch your accounts to other credit cards by Feb. 7th -- the opening day of the Olympics -- so they hear our protest!

Stand up for the LGBT citizens of Russia and sign the following pledge that will be delivered to VISA:

"As a major sponsor of the 2014 Sochi Olympics, VISA has a responsibility to speak out against the state-sanctioned violence and persecution of LGBT people in Russia. Due to your refusal to stand up for human rights and equality in Russia, I am closing all my accounts with VISA, switching to other credit card companies, and encouraging others to do the same."