Do You Want Millionaires to Pay their Fair Share in California?

Do You Want Millionaires to Pay their Fair Share in California? 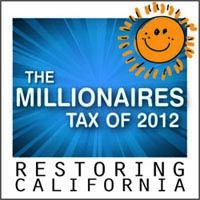 The Millionaires Tax campaign is over. After mobilizing massive grassroots support for the initiative, we convinced Gov. Brown to combine his proposed initiative with ours creating Proposition 30, which passed with 55% of the vote in November 2012!
If so, declare your support for the Millionaires Tax of 2012 and join the national movement for a millionaires tax, starting in California!
What is it? A statewide ballot measure that asks Californians who make over $1 million per year to pay a little bit more to invest in California after years of devastating cuts.
Why do we need it? Since 2008, budget cuts have led to big increases in K-12 class sizes, nearly a doubling of community and state college tuition, and billions in cuts to essential services for children and seniors.
What does the measure do? It asks those making more than $1 million a year in personal income to pay their fair share in taxes so we can raise an estimated $6 billion to begin:
Who's behind it? A coalition of educators, parents, and community groups working together to restore California's middle class (see below).
What can you do to help? Build the movement to put this on the ballot. Add your name below and tell your friends and family. Once you sign, you'll be given a chance to share this page via Facebook, Twitter, or email.
To read the details of the ballot measure click here.